This is my review of the French-built MicroMega M150 Integrated Amplifier.  It is heavy, slim but loud, and what a sound!  In the month of the launch of the new Naim SUPERNAIT 3, this is a French take on the classic integrated amplifier with a digital offering that goes way beyond the analogue legend of the SUPERNAIT.

I am generally preferring my HiFi components to do just one or two things really well, like the Bluesound Node 2i or the Vega G1 DAC from Auralic, or more classically my NAP250 but this MicroMega M150 Integrated Amplifier has so much more, a built-in DAC, streaming options, a built-in MM or MC phono stage, etc.

This MicroMega M150 Integrated Amplifier is an analogue beast with an Asahi Kasei  AK 4900 “Velvet Sound” DAC chipset.  This means it can do the digital side of HiFi too in the same box.  The 150 bit is 150W per channel under 8Ohms.  There is an M100 as well with 100W per channel.

It is built on a Class A/B specification that is hard-driving with bags of energy in the design.  It is slightly more efficient in electrical terms than a classic Class A amplifier but it still runs hot.  This means it needs to breathe and this is tackled using the Aluminium chassis of the M150 as a heat sink.    Because the M150 is so slim, it also has a forced-air cooling system built in a channel across the width of the chassis.  This is not a big deal unless you are playing quiet music.  I’ve not been affected too much, if I’m honest, with the compromise.

The MicroMega M150 Integrated Amplifier has the following inputs:

Digital:
1 x USB Type-B
1 x Coaxial
1 x Optical
1 x AES-EBU
2 x I²S – these are for future Micromega products, they are HDMI by the looks of it.

The MicroMega M150 Integrated Amplifier is well built and beautiful to the touch, being brushed Aluminium machined, apparently, from a single aluminium block.  The display is on top and on 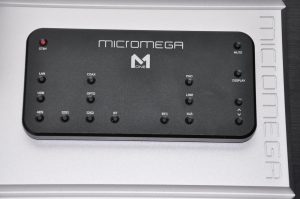 the front.  The display configuration allows for wall mounting, though I am unclear how this would work as I can’t see and mounting points clearly.

The metal cased remote control is unconventional, being the same size and thickness as my Pixel 2xl phone, but it is landscape.  The remote has the usual array of buttons for inputs, volume control and a useful mute button. 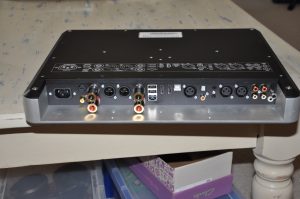 Set-up is deeply, deeply frustrating especially if you are swapping things about as I have to do.  There is no room for fingers or thumbs, there is no labelling on the back (it is underneath on the underside) and it is cramped from crampedville at the back.  BUT, once you’re in, none of it matters as the MicroMega M150 Integrated Amplifier has tons of power to drive just about anything…

….except, my Jern 14 speakers that I use all the time for their detail and fantastic soundstage.  I think this is because of their unique design with a separate subwoofer to support the low frequencies there was a problem with power delivery to the Jern 14s above 100Hz.

However, once the Focal Kanta No. 1 speakers arrived I was in a different place altogether.  The stunning power from the MicroMega M150 Integrated Amplifier coupled with a clean breathing pair of proper speakers is a total showstopper.

I’m not reviewing the LAN connectivity because the Android App is poor (I think by their own admission) and I don’t have a new iPad (mine is a 1st Gen one).  But you can send music to the MicroMega M150 Integrated Amplifier through network connective players such as J River.  I think if this is important to you your retailer will be able to advise you properly and you should make a point of test driving this functionality before you buy.  If you have a USB B option with a laptop, none of this matters anyway.

So with all that said I’m just concentrating on the sound with this set-up; a new-gen Atlas Eos dd power cable into the MicroMega M150 Integrated Amplifier, an ‘old’ Atlas Eos power cable into the ‘Outstanding’ Auralic Vega G1 streaming DAC, with QED XLR into the M150.  With Atlas Mavros speaker cables into the Kanta No. 1s, I’m a very lucky young man (old man I suppose now). 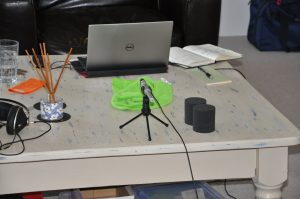 I played a few tracks through the G1, including ‘Rooting for You’ by London Grammar.  I then tried the Micromega Acoustic Room System.  You have to plug in the microphone, provided, and just follow the instructions on where to put it.  I downloaded them from the Micromega site on my phone.

It absolutely freaked the dog out big time!  The M150 sends out a series of pulses to the mic at different frequencies and different volumes, left, middle and right in order to get a feel for the room.

After M.A.R.S. here is a choice of ‘Auto’ or a ‘Flat’ setting.  You get Auto as a matter of default and in my room, the Kanta speakers had a slightly warmer sound after set-up.  I found the room correction icon reassuring on the display and I certainly think this added to the output so this is pretty impressive really,  I have the GIK reflection panels helping my listening space but the M.A.R.S. certainly added more crispness to the Kantas.

I have got to say here, first up the Bluetooth performance was stellar

I have got to say here, first up the Bluetooth performance was stellar.  Putting James Bay’s ‘Let It Go’ on Tidal on my Android Pixel 2xl and then Bluetoothing it over to the MicroMega M150 Integrated Amplifier was fantastic.  I really cannot commend this output highly enough and I was slightly taken aback by how good the BT was.

The best output I’ve had from this set-up was using the MicroMega M150 Integrated Amplifier with this brilliant Vega G1 streaming DAC with balanced output.

I thought I’d go light to thunderous, it’s just how this amplifier makes you feel (Nils Frahm to A Tribe Called Quest)!

I went for ‘Ode’ by Nils Frahm, a pure piano masterclass, recorded in 24 bits with the piano sides removed apparently.  Every detail is there from the Kantas and it is beautiful, even at low volume.  So the resolution is no problem from this amplifier. I went through my set of review tracks.  ‘Rooting for You’ by London Grammar is a beautiful, resonant, dominant, powerful and pure musical joy.  It feels like there is loads of rhythm and bounce in this amplifier, old favourites like ‘Telegraph Road’ bounce along here and then the subtlety of ‘Subterranean Homesick Alien’ reminds me how great proper music is.

Then this amplifier cries out for some heavy sounds, it is time for ‘We The People’ from A Tribe Called Quest, Boom!  What a sound.  As with all great things, when it appears effortless it’s the best and this is it, the speaker match I have with this M150 is brilliant. 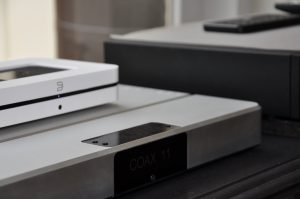 The DAC in this integrated amplifier is quite exceptional and it certainly merits mention.  Basically using the DAC coaxial output from a BluesoundNode 2i the M150 produces the same high quality streamed output.  There is little to complain about here with brilliant clarity from the Node 2i streamer through the M150s Asahi Kasei  AK 4900 DAC chipset.

Line Input FROM a Bluesound Node 2i

Taking a line input from the Node 2i into the amplifier means the digital bit is being done by the Node 2i and the M150 is just driving the speakers, which is bread and butter for this M150.  Like the XLR input, there is tons of power here, but my more favourable sound is being delivered by an XLR connection from the G1, above.

An interesting thing here, with both the Meze 99 Neos and my ever-reliable Oppo PM-3s the output from the headphones output was muffled in the vocal.  I was puzzled and so with a pair of Focal Spirit headphones, the output is perfectly acceptable.  With the Meze Empyrean blockbusters (changing the cable to 3.5mm jack). the output is very nice and the Empyreans remind you how good they can be.  So what was going on with the 99s and the PM-3s?  I realised they both have a microphone and so a TRRS jack at the end (three bands), the other two have a TRS (2 band) jack.  I’m obviously not clear if this is a headphones thing or an M150 thing but if your favourite headphones have a TRRS jack, take note.  Otherwise, the headphone output is pretty good, if you are a Naim user as I am, and often a bit let down.

Delivery is seamless, the resolution is perfectly on point and I am delighted with the functionality

I’ve had a brief play with this using my DELL XPS.  I’m bound to say with this USB B connection, any problems with the LAN streaming are easily forgotten with my Tidal desktop App.  I just downloaded the USB driver for my Windows 10 account.  Delivery is seamless, the resolution is perfectly on point and I am delighted with the functionality.

I then connected my Rega RP3 with an Elys 2 cartridge.  The MM/MC switch is very difficult to access, I have no idea of the gain setting on the instructions but the MM input from my Rega RP3 was perfectly acceptable and once again the M150 gets a huge tick in the functionality box.  I’ve had to turn things up a bit but there is plenty of pace and rhythm from Ryan Adams’ best work “Gold”.  A languid listen to ‘Colfax’ by The Delines reinforced the thought that this amplifier is a real allrounder.  Great amplification, plenty of bass when demanded and lovely detail.

This has been the most interesting review I have done for a long time.  For example, the Benchmark HPA4 was clearly just great, from the box, you knew it from the minute it was plugged in the first listen.  The MicroMega M150 Integrated Amplifier is clearly a fantastic integrated amplifier, driving the Focal Kanta No.1s with utter ease, they’re breathing, gulping in lungs full of air.

But the MicroMega M150 Integrated Amplifier is both crushingly frustrating and over-designed in equal measure, but it has tons of power and is really fun.  Its flexibility and functionality is the key with a brilliant Bluetooth and USB offering, a fabulous DAC chipset and a good built-in, phono stage.

The MicroMega M150 Integrated Amplifier is a really really good allrounder and I would suggest that it should be on your shortlist if you are looking at a system built around a SUPERNAIT,  a Moon 600i, a Rega Osiris or similarly priced options.

It’s a ‘Highly Recommended’ from me. With a decent App, it could be Outstanding but it is just not quite there, though I am sure it will be with more R&D and App input. 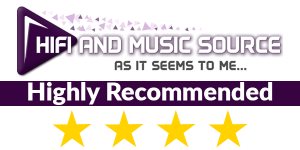 The back was more accessible

The MicroMega M150 Integrated Amplifier is available through SCV here.  It is priced near £5,499 and the 100W version is nearer £3,799.  The 100W version has Room Correction as an optional extra.

A few spare pics of the MicroMega M150 Integrated Amplifier 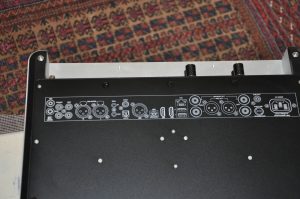 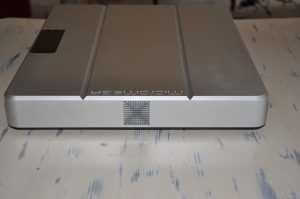 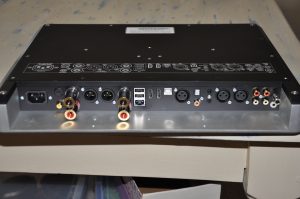 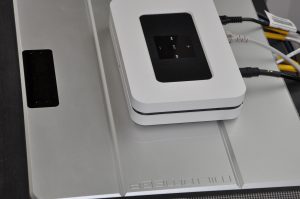